Scam and corruption from UPA era back, UPA made CBI a caged parrot, MVA made police force a collection agent to run extortion racket? 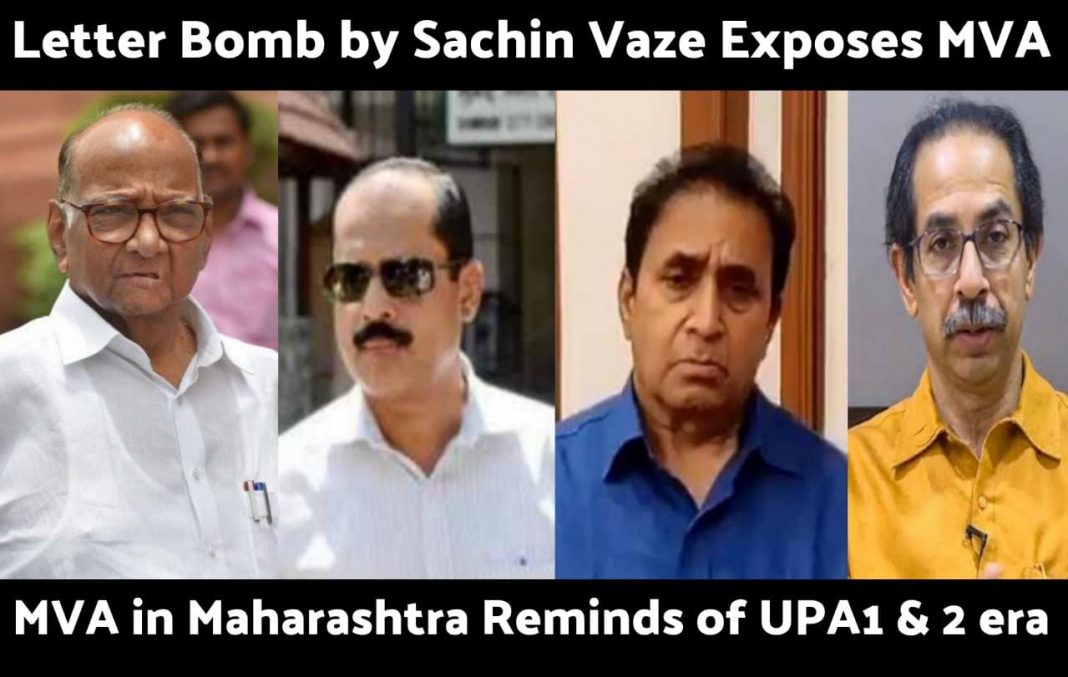 Air was full of despair as citizens had turned into helpless mute spectators, when the UPA government committed scam after scam and colossal corruption such as 2G, Agustawestland, Commonwealth Games, Coal Scams and many more. There was a UPA coalition at the center from 2004-2014. There has been an MVA coalition in Maharashtra since November 2019. MVA went one step further to run extortion of 100 crores per month.

Maharashtra Home Minister, Anil Deshmukh, allegedly, was not only running a 100 crores extortion rackets every month using the police as collection agent, but also he was extorting money from police men. Suspended Assistant Police Inspector Sachin Vaze wrote a letter to the National Investing Agency (NIA) that the then Home Minister Anil Deshmukh had demanded Rs. 2 crores for reinstating him into Mumbai Police in 2020. It is to be recalled that Sachin Vaze, 1990 batch officer—was part of the Crime Intelligence Unit (CIU) of the Mumbai police—had resigned from the police force in 2008 after Khwaja Yunus’s custodial death in January 2003. He had been reinstated in June 2020 after 16 years.

In a handwritten letter, Sachin Vaze revealed that NCP Chief was reluctant to reinstate him into Mumbai Police in 2020. Therefore, Anil Deshmukh asked Vaze, if he pays Rs 2 crores, he would persuade Sharad Pawar to reinstate him into the police force. Vaze writes that since he was unable to pay such a huge amount of money at that time, Deshmukh offered him to pay later.

Vaze’ handwritten letter further makes explosive revelation—Anil Deshmukh called Vaze to Sahyadri Guest House and demanded him to collect Rs. 3-3.5 lacs from 1650 bars and restaurants in Mumbai in October 2020. Same demand was made again in January 2021, when the two met at Deshmukh’s official Bungalow.

Vaze shockingly claimed, Maharashtra Transport Minister and Shiv Sena leader Anil Parab called him at his bungalow in the month of July/August 2020 and asked him to squeeze Rs 50 crores from SBUT, Saifee Burhani Upliftment Trust, which was facing an inquiry. Anil Parab offered if the trustee of SBUT was ready to cough up Rs. 50 crores, the inquiry could have been closed. At this demand, Vaze expressed his inability to extort money from SBUT as he was not known to any one in SBUT.

Vaze claimed Shiv Sena leader, Anil Parab called him once again in January 2021 and asked him to find out fraudulent contractors listed in the BMC and collect Rs. 2 crores each from them.

Sachin Vaze told the then Mumbai Police Commissioner Param Bir Singh about extortion demanded by ministers. Vaze also expressed his fear that he might get involved in a controversial case. Param Vir Singh instructed him not to commit such illegitimate collection of money. Sachin Vaze’s letter corroborates the claim of Mumbai Police Officer Param Bir Singh’s letter to Chief Minister Udhav Thackeray on March 20, in which he too, claimed, “Anil Deshmuh had asked police officers including Sachin Vaze to collect Rs. 100 crores per month from bars and restaurants.

ना खाऊंगा ना खाने दूंगा’ which means neither I would commit corruption, nor I would allow anyone to commit corruption, PM Modi gave this slogan after he came to power in 2014. It was a fresh air for citizens to breathe, who had not been inflicted distress of scams and corruption cases since 2014. But, MVA in Maharashtra offered its people black days what UPA gave to India during 2004-2014.

In May 2013, Supreme Court had expressed its distress, when it called CBI “a caged parrot” speaking in the voice of its political masters. Almost every institution had been compromised during the UPA era as the then PM Manmohan Singh, who allowed scores of scams and corruption to take place, had openly admitted some compromises have to be made in a coalition.

MVA went one step further, making its police force a “collection agent” to run extortion rackets. Unfortunately, Maharashtra—which didn’t vote for this coalition, actually friends with benefits—had to bear this government. Shiv Sena had contested the election in a pre poll alliance with BJP. The Shiv Sena-BJP alliance was broken after Shiv Sena demanded the office of Chief Minister for 2.5 years. BJP didn’t give in to Shiv Sena demand for Chief Minister. Hence, MVA came into existence. Is this why Shiv Sena was demanding the post of CM so that they can extort money? Voters of Maharashtra wonder.

Manisha Inamdar
Previous articleWere Mamata Banerjee & Prashant Kishore aware of the Naxal attack on our Forces? As it happened as per their prediction !!
Next articleMajor Breakthrough – Varanasi Court orders ASI to conduct a survey of the Kashi Vishwanath Temple complex
- Advertisement -