Restrictions On Firecrackers Affecting The Livelihood Of Lakhs 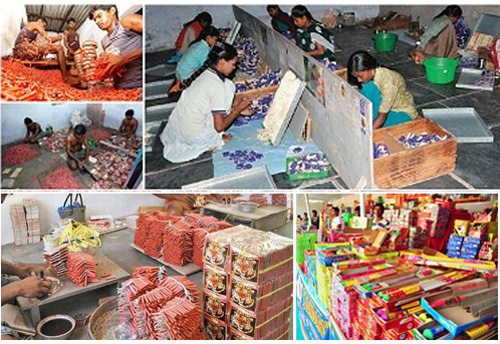 In today’s age, where humanity is fighting against discrimination towards caste, gender, race, religion, etc., there is a strong sense of Hinduphobia spreading among these so-called liberals who have taken it upon themselves to “right every wrong in the society”.
With Diwali around the corner, and Hindus celebrating the victorious home-coming of Lord Rama after a 14 years long exile, several occurrences of slamming the traditions of this festival are surfacing the media.

As a child, I remember going to the market with my parents and buying colours for the rangoli, diyas to light, flowers and garlands to decorate our home, and crackers to celebrate the festival. As I grew up, I noticed that a lot of these traditions were being demonised and attacked by liberals in the name of environment, animal protection, humanity, awareness and the list goes on and on.

This custom of ceremoniously targeting of Hindu festivals, especially Diwali, has had a huge impact on small businesses and vendors that trade in items used during festive seasons.
Let’s take firecrackers for instance; individuals across the world, irrespective of their religious beliefs, use crackers to celebrate special occasions. However, bursting crackers on Diwali is highly looked down upon in our society, specifically talking about environmental issues, animal protection and human rights. It is only during Diwali that stories about inhuman conditions at firecracker manufacturing units start doing the rounds.
What happens to these (fake) concerns over the rights of these workers during the rest of the year? Why aren’t isolated instances of firecrackers bursting scrutinised? Special articles over “Diwali Without Firecrackers” are published by almost all leading newspapers. Even this is not enough,since last 7-8 years state governments are giving full advertisements of Diwali greetings including a message of crackers free Diwali.

The gullible Hindu reader is shamed into thinking that their two-hours Diwali celebration pollutes the environment for the whole year. The bad publicity for firecrackers during Diwali has led to several state governments imposing a blanket ban on firecrackers during the festival. The next height of the hypocrisy is such that in schools, children have to take oath of not to burst crackers on Diwali.
This year, list of the states/ UTs who completely or partially banned the firecrackers are Tamil Nadu, Rajasthan, Chandigarh, Assam, West Bengal, Delhi, Karnataka, Punjab, Haryana and Chhattisgarh. In partially banned states/ UTs the issued guidelines allowing bursting of firecrackers are strictly from 8:00 pm to 10:00 pm.

Hon’ble Supreme Court banned the production and sale of all crackers except “Green Crackers” and those with reduced emissions in its October 2018 order, stringent rules by state governments are curbing businesses and vendors from selling their (alternative) products in the market.
According to media reports, Virudhunagar district of Tamil Nadu has a total of about 8 lakh people in and around the area, directly and indirectly depend on the firecrackers industry for their livelihood. This includes three lakh workers in firecracker manufacturing units alone, a majority of whom are women. As many as 1,070 manufacturing facilities of various sizes and over a 1,000 traders of firecrackers function in and around the Virudhunagar including Sivakasi, the fireworks nerve centre.

Traders of some states have unsold stocks worth crores and they are requesting the governments to allow use of firecrackers as per norms on Diwali for two hours. Recent analysis show that firecracker industry is estimated to be around Rs. 6,000 crore out of which Delhi/NCR share is around Rs 900 crore.
While the Supreme Court has announced that a blanket ban on firecrackers cannot be imposed, liberals continue to advocate for the blanket ban. It is astounding to see activists and liberals taking the position of mute spectators when goats are sacrificed in the name of religion or, when New Year’s Eve celebrations delay flights due to poor air quality.

While it is noticeable that with time the traditions have evolved and there may be some course correction required. However the course correction must come from within the faith and not from wannabe sycophants for whom these festivals have no significance.

Writers:-
Rahul Palhania:– Rahul is currently a research analyst with a Mumbai based Think Tank and earlier worked with news agency ‘IANS’.

Jenisha Kiri:– Jenisha is currently a research analyst with a Mumbai based Think Tank and has worked on Green Economy Transitions with respect to Local Green Enterprises.