India’s 5 Glorious Ancient Universities, which were destroyed by invasion 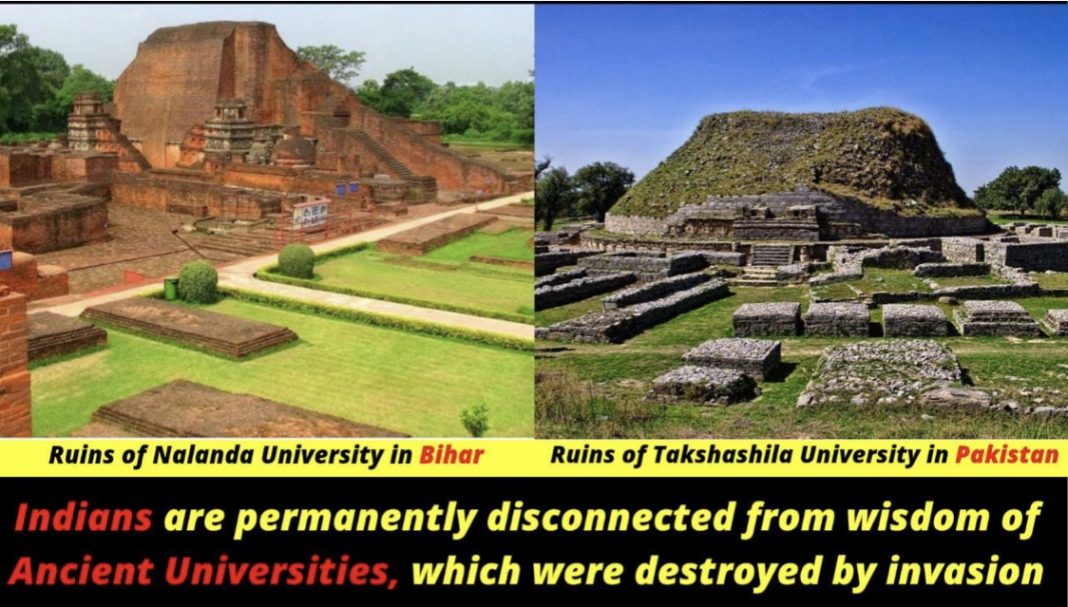 Ancient Takshashila University (wrongly spelled as Taxila today), was the IIT and MIT of the world during its times. It was founded by Chandragupta Maurya in 6th century BC. Ruins of institutions is situated about 50 KM west of Rawalpindi in Pakistan. It had than 10,000 students from Babylonia, Greece, Arabia and China. The curricula of university offered sixty different courses in various field such as science, mathematics, medicine, politics, warfare, astrology, astronomy, music, religion and philosophy. Only 3 out of 10 students passed the entrance test of the university.

Gaining the great fame, Takshashila University continued to grow in its glory for 800 years. Panini, the Sanskrit grammarian, the great Chanakya, Charaka, the famous physician of ancient India and Chandragupta Maurya were its famous alumni.

Takshashila, a state of Gandharva, was situated at the Indus river, from where Indus civilization prospered. Kidara Huns, who invaded Takshashila, destroyed the university in 5th century.

Nalanda Mahavihara (University), the renowned center of learning was founded by King Kumaragupta of Gupta dynasty during 5th century, in the kingdom of Magadha, at present in Bihar. Gupta Dynasty had ruled at the parts of present day India, Pakistan, Nepal and Bangladesh. Historical accounts describe Nalanda University lasted glorious span of time from 5th to 12th century. The residential university, first of its kind, had 2000 teachers and 10,000 students from China, Korea, Japan, Tibet, Mongolia, Turkey, Sri Lanka and South East Asia. Syllabus of University offered the study of Philosophy, religion, Buddhism, astronomy, mathematics anatomy etc. Profound knowledge about highly facilitated University came from Chinese scholars and best known of these is Xuan Zang, who carried back hundreds of scriptures, later translated into Chinese.

Nalanda University, which boasted a campus of 90 lacs books and vast architecture, was brutally burnt down by Bakhtiyar Khilji, a Turkic military general of Qutb-ud-din Aybak in 1193 AD. Whoever, be it students or teachers came in the way to protect the institution was mercilessly butchered. Knowledge recorded in 90 lacs books was lost forever.

Vikramshila Mahavira (University), was established by Bengal emperor Dharampala of the Pala Dynasty during late 8th and 9th century AD. Successive Pala rulers continued to patronage to the institution. It is said Vikramshila University attracted scholars and students alike. Knowledge was supposed to facilitate both spiritual liberation and perfection of worldly skillMs for earning livelihood.

The buildings of Vikramshila were well planned with one hundred and eight temples and six college buildings spread out like Lotus petals. This was also residential University with 208 cells, 52 on each side for students as well as teachers. Along with branches of Buddhism—Mahayanism and Hinyanism, all important branches of Hindu learning such as study of Tantras was taught. A student was admitted to the University only after he qualified the entrance test given by eminent scholars. Unfortunately, the knowledge center was also destroyed by Bakhtiyar Khilji in 1193 AD.

Vallabhi Vidhyapith (University) was founded by Maitraka Dynasty of Saurashtra in 600 AD. Maitraka Dynasty ruled Saurashtra from 475 to 776 AD with their capital in Vallabhi, which is now Bhavnagar. During its glorious day, it was considered to be parallel of Nalanda University. The university taught science, wisdom, theology, economics, accounting, law, agriculture, etc. Graduates of Vallabhi University were employed by the king to assist the government. Can it be called Campus Placement during the era?

Even after Maitraka Kingdom was attacked by Arabs, Vallabhi University continued to function. However, defeat of its patron king caused the slow death of its operation in 12th century.

Kanthalloor Shala (University) was called as Nalanda of South India. Kanthalloor University was founded by Aayi kingdom in 852 AD. Kanthalloor Shiva temple at Valiyasala in Thiruvananthpuram is the only remnant of the era. Historians said university existed in the premises of temple spread across 500 acres of land as it was Gurukul system of education those days. The university had taught Mathematics, Chemistry, Martial Arts, Astrology, Astronomy and Ayurveda. It was a Vedic residential institution with students living in proximity to the teachers. The University Vedas, Mantras, Astrology, Science and even art subjects such as Music, Drama and Dance.

India was hub to knowledge, home to great number of renowned ancient universities, which were destroyed by Islamic invaders and, later British put a cap on them. This is how Indians were disconnected from vast knowledge of ancient times. One can’t help it but to ask oneself, if India would be able to reclaim their lost education and wisdom to bask in glory of being center of knowledge?