Hypocrisy of Bengal’s elites and the TMC-Left regarding Netaji 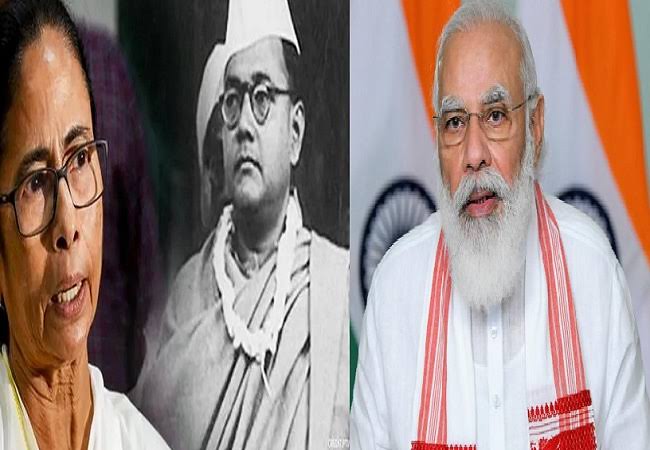 The Govt of India has already declared 23rd January, Netaji Jayanti as the day from which our Republic Day Celebrations will commence, from this year. It is the incumbent Central Govt who has accorded the highest respect to Netaji by celebrating the 75th anniversary of the day on which the Indian Tricolour was hoisted on Indian soil by reclaiming a piece of our territory from the Brtitish by Netaji’s Azad Hind Fauj. It was the incumbent Central Govt who had declassified Netaji’s files – the fact that not much headway could be made into Netaji’s mysterious disappearance from those files, is not their fault because the party, Congress, which is responsible for Netaji’s predicament ruled the nation for all these years and had ample oppurtunity to destroy significant evidence.

The BJP was nowhere in the scenario till then. The respect and recognition that Netaji is receiving as the nation’s greatest hero is only and exclusively due to the incumbent government at the Centre, which he never received earlier on. No one, mind you no one can deny that.

So TMC’s rants of the Centre showing disrespect to Netaji are totally baseless and nothing but a pack of lies, one amongst their numerous lies told with the intention of fooling the people of Bengal. The party, buoyed by their electoral success, have staked claim over each and everything in Bengal, including her history and her national heroes. Their recent election campaign claiming Swamiji and Netaji as TMC bear evidence to that. So does the act of inserting a TMC flag into Swamiji’s statue. They have openly disrespected Netaji in the past by putting his photo at the feet of the cutouts of their leaders. Now their crocodile tears of showcasing Netaji and other freedom fighters in Bengal’s tableau should not move anyone – who knows if they were claiming our national heroes as their personal property, in that tableau.

It is utterly shameful that, instead of appreciating the Centre for including Netaji’s birthday as a part of the Republic Day Celebrations, they are, as usual, behaving in a mean and conceited manner, blaming the Centre for rejecting their flawed tableau, which, who knows, might have caused further embarassment to Bengal, given their penchant for fakery.

Equally shocking is the attitude of the spineless ‘intellectually enlightened’ group amongst the Bengalis who are outraging at the Centre’s decision. I was born and raised in Kolkata and lived all my life here. I didnot see any of the state govts, who have been ruling us for the last 44 years attempt to show any examplary respect for Netaji or any of the other valiant revolutionaries from Bengal except for tokenism. All they cared was for some imported leaders with shady records – the likes of Marx, Lenin, Stalin etc. The TMC is just another leftist outfit with a different name and hue. Why have we not seen any of these ‘intellectuals’ claiming Bengali pride, utter a word against the state govt whom they elected to power?

The TMC is an offshoot of the Congress, the very party which caused Netaji’s mysterious disappearance and also tried to downplay his contribution towards our freedom struggle. How can anybody expect justice from TMC as far as Netaji is concerned? TMC’s hypocrisy regarding the liberator of our nation needs to be called out rather than considering them to be one of the interested parties seeking justice for Netaji.

Ranita Indic
Previous articleKerala court acquits rape-accused Bishop Mulakkal: Why nobody is saying “I feel ashamed to be a Christian”?
Next articleVedic Knowledge- Wisdom for Humanity
- Advertisement -