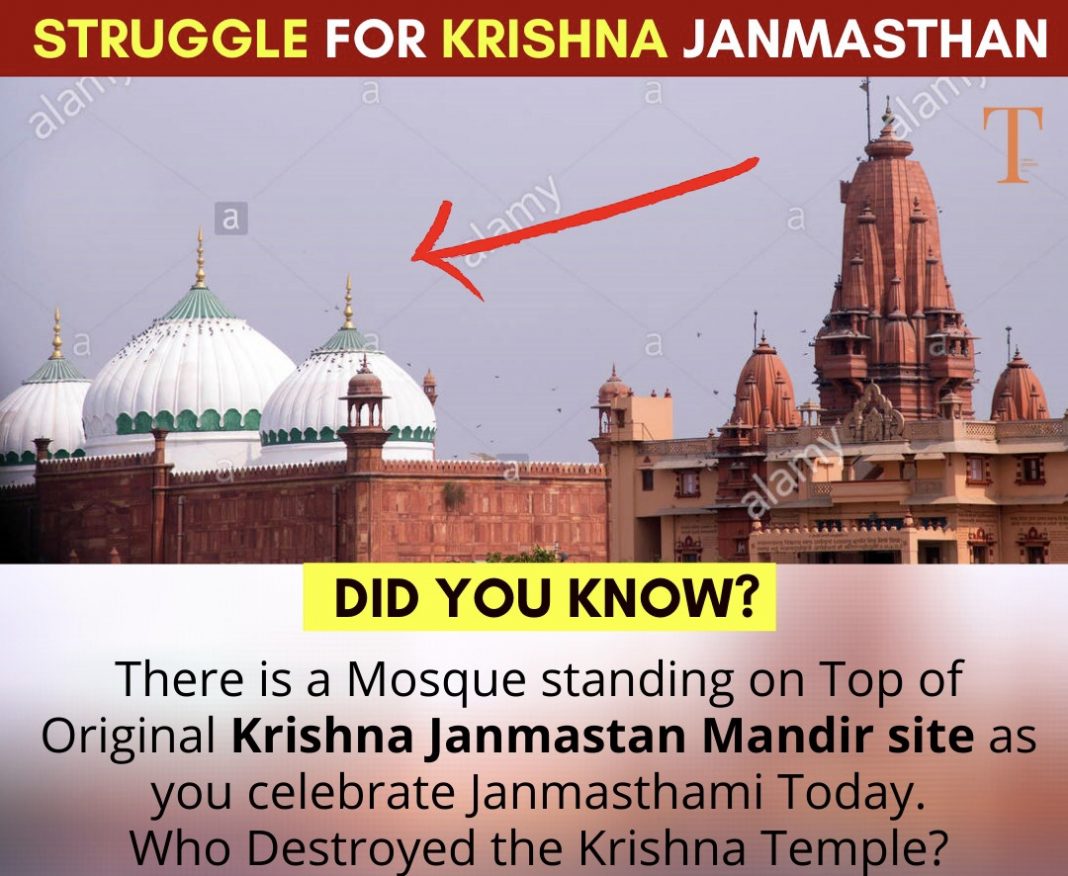 The Krishna Janmabhoomi is buried below the Shahi Idgah Mosque in Mathura today much the same as original Kashi Vishwanath temple is buried under Gyanvapi mosque in Kashi and the Ram Janmabhoomi was hidden under Babri mosque in Ayodhya.

Hence, Hindus can not celebrate the original divine birth place of God Krishna, the protector of Sanatan Hindu Dharma. Hindus have been prevented from celebrating and worshipping at actual Kashi Vishwanath temple, where Jyotirlinga manifested itself. Hindus had been disgraced not to worship at the actual divine birth place of God Ram till now. However, construction of Ram Temple has started.

What is humiliating for Hindus is that a make shift Krishna Janmabhoomi temple was constructed at adjacent place much after independence without destroying Shahi Idgah mosque, which is symbol of terrorism and humiliation in Mathura. Similarly, Kashi Vishwanath temple was built without demolishing Gyanvapi mosque. The only symbol of terrorism and disgrace was razed was Babri mosque, where construction of Ram Temple has just started.

During Islamic invasion in India, tens of thousands of temples were desecrated and destroyed across India. Destruction of temples with bloodshed could not stop even after 15 August 1947 especially in Kashmir and in parts of eastern and southern India.

Aurangzeb—whose name reminds of bloodied history of temple destructions and carnage, was radical believer of Islam. He demolished several Hindu temples across India to wipe off the historical significance of Sanatan Dharma committing carnage with an intention to islamise India. Not only Aurangzeb destroyed many Hindu temples but even converted many of them into mosques.

The Shri Krishna Janmabhoomi Nirman Nyas has been set up in Mathura, with 80 saints from 14 states as part of it to initiate the struggle to free Krishna Janmasthan temple. The Nyas was registered on July 23 on the occasion of ‘Haryali Teej’ headed by Acharya Devmurari Bapu.

A signature campaign would soon be launched to connect with other saints and citizens across the country for the ‘liberation’ of the Krishna Janmabhoomi. Thereafter, a nationwide movement would be campaigned. Bharatvarsh reclaimed its glory when ‘Bhoomi Pujan’ was conducted and the foundation stone was laid to begin construction of Ram Temple by PM Narendra Modi at 12:40 pm on August 5. It is in the womb of time when Bharatvarsh liberate Krishna Janmasthan Temple from Shahi Idgah Mosque.

The World has been changing gradually, people are in a rat race to fulfill their dreams and aspirations. Amid all this, there...
Read more