Hindus have been subjected to genocide since eras. Shouldn’t there be strict genocide law to punish perpetrators of genocide? 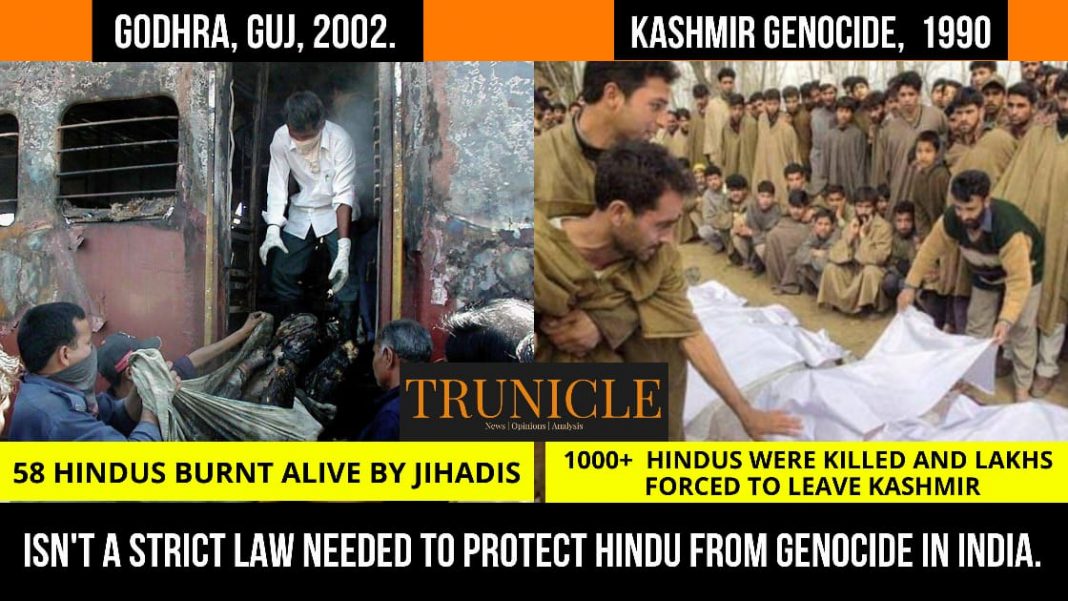 Disturbing images of mutilated bodies of Kashmiri Hindu men, women, even innocent young children and new born babies, lined up after brutal massacre, gang rapes and looting are still fresh in public memory even after 30 long years, when Hindu Holocaust was perpetrated during 1989-90.

Brutal genocide and exile of lacs of Hindus in Kashmir are crime of crimes, against which not a single FIR out of 215 registered cases was investigated by Jammu & Kashmir government. No judicial inquiry was set up by central government. To rub the salt into the wounds of Kashmir’s ethnic minority community, Apex Court rejected the second plea, in Oct 2017, seeking probe and prosecution of various criminals, including separatist leader Yasin Malik and Farooq Ahmad Dar, alias Bitta Karate, for committing massacres of Kashmiri Hindus during 1989-90, when Islamic terrorism raised its head in Kashmir.

Judiciary shut its door when the Supreme Court rejected the second plea on 25 October 2017 filed by Advocate Vikas Padora, appearing for an organisation ‘Roots of Kashmir for an investigation into the mass killing of Kashmiri Hindus in 1989-90, which forced them to leave their homes.

Chief Justice of India asked Vikas Padora, “Where were you till now? Why are you coming to court now? Are you making a drama here? Are you making a political speech and saying all this for making headlines in the media?” Question arises, “Where would survivors of genocide move to seek justice? Hindus in Kashmir have undergone not one but seven genocides. Recently brutal killing of Ajay Pandita Bharti—lone Hindu Sarpanch in Kashmir valley proves genocide of Hindus still continues.

In 2018, Congress leader Sajjan Kumar was convicted for his active role in anti Sikh riots in 1984 by Delhi High court to spend the remainder of his life in jail, after Prime Minister Narendra Modi set up an SIT in 2015, which began re-investigation into several cases of 1984, pending for over three decades. But Sajjan Kumar would approach the Supreme Court against the verdict. Is the punishment enough for Sajjan Kumar? Was Jagdish Tytler, another accused in anti 1984 Sikh riot even convicted?

However, Genocide of Hindus in Punjab during Khalistan movements went unnoticed. Terrorists of Khalistan continued to butcher Hindus and rape their women during 80s. A huge number of Hindus had to flee Punjab. Who can forget indiscriminate killing of 39 Hindus in Haryana State Roadways bus in July 1987 in Chandigarh. Uncountable Hindus were killed in such ambushes by Khalistan terrorists. Did Hindu community even raise their voices to demand justice? Were perpetrators of cold blooded murderers of Hindus by Khalistan terrorists ever punished?

On February 27, 2002, S-6 coach of the Sabarmati Express was set on fire at Godhra railway station, wherein more than 60 Hindu pilgrims including women and children were burnt alive. Anti terrorist squad in Godhra captured one of the masterminds Haji Bilal, a local town councillor and a Congress worker the very next month in March 2002. FIR alleges a mob of 1500 arsonists had attacked Sabarmati Express. Almost, seven years after the riots, the trial in the Godhra burning case had begun in 2009. Out of 1500 strong mob—who poured petrol on S6 of Sabarmati Express—only 134 were accused. 14 were acquitted due to lack of evidence, 5 were juveniles, five died during proceedings of over nine years and rest of them are still absconding. Are real masterminds behind burning of Sabarmati Express punished?

Is it because India has no Genocide Crime Punishment and Prevention Law that alleged dreaded criminals like Yasin Malik, Farooq Ahmad Dar, Sajjan Kumar, Jagdish Tytler, arsonists of Sabarmati Express get away, but also they continue their agenda to wage the war against the nation?

When the world was heavily afflicted with blood, gore, death, destruction and despair of the World War II from 1939 to 1945, India was suffering from pain of partition, which caused unspeakable amount of bloodbath on its streets in 1947.  Nevertheless, during Second World War, it was Holocaust of European Jews, which drew attention of international community to draft Convention on the Prevention and Punishment of the Crime of Genocide, which was adopted by United Nation General Assembly on 9 December 1948. It came into effect on 12 January 1951.

Hindu genocide and hate crime against Hindus have been continuous phenomena in India, which is signatory to the Convention on the Prevention and Punishment of Genocide. This is high time India must define GENOCIDE in its constitution and pass a law to punish perpetrators of genocide in the country.

When India passes a law to bring to book perpetrators of Hindu genocide, it would be in position to demand justice for Hindus in Its neighbouring countries Bangladesh, Pakistan and Afghanistan where persecution and genocide of Hindus are not even reported.

In Pakistan, population of Hindus have gone down to less than 2% today from around 13% in 1947. Rajasthan, Delhi and Haryana are full of refugee camps of Hindus and Sikhs fleeing from Pakistan. Hindus in Bangladesh have been going through ethnic cleansing since 1947 when today’s Bangladesh was East Pakistan. Hindu minority, which once comprised 31% of the population in 1947 in Bangladesh and has diminished to mere 9% by 2002 population count.