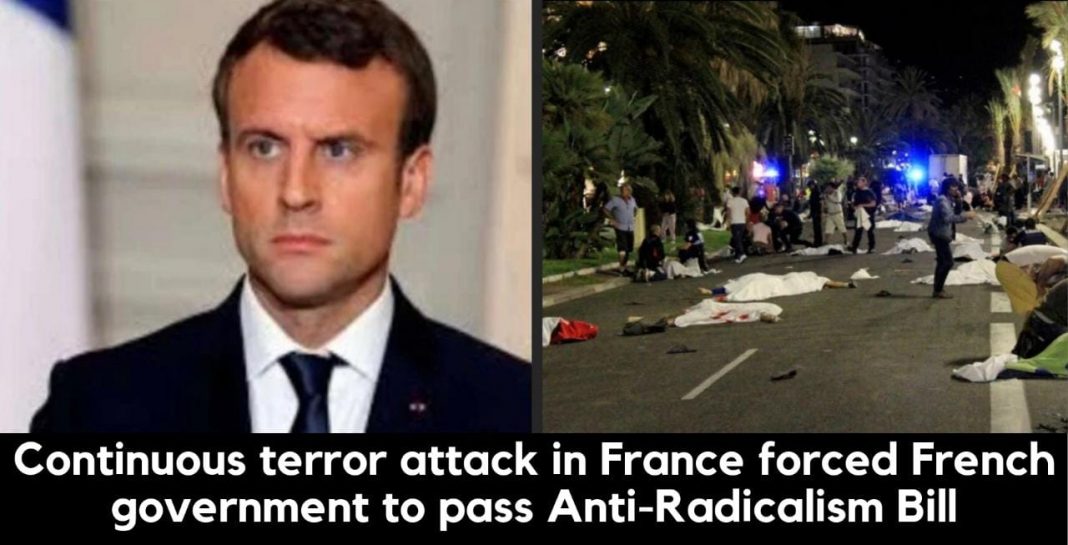 Tough time call tough measures. When France continued to be attacked by radical Islamic terrorism, it passed Anti-Radicalism Bill on 16 February to safeguard France from religious fundamentalism and to ensure respect for French values. But, why was France forced to pass a Bill, which is uniformly applicable on every French citizen?

There was a kind man, who opened the door of his house for homeless to help them to rehabilitate. With passage of time, when the homeless found their feet in the new atmosphere, instead of being grateful to the owner of the house, they demanded to implement  their own set of rules in the house. When the owner refused to accept their demands, the homeless, who were settled now, started threatening and injuring family members and destroying home. Shocked and stunned owner was forced to enforce a new set of rules for every occupant of house to instil discipline in order to run the house properly.

This is exactly what happened to France. France—which stood for secularism, freedom of speech, freedom to practice any religion without any sense of fear, equality for women and minority—opened its border for homeless and destitute Muslim refugees from war torn Islamic countries and failed states like Pakistan and Afghanistan. A first world country, France with high Human Development Index, provided poor refugees with roof over their heads, employment along with free and peaceful air to breathe far from ear shattering noise of fire arms and cannons. What happened next? Instead of showing gratitude to France, Muslim refugees started demanding Sharia Law to be implemented in France. When France opposed the idea of Sharia Law, radical Islamists began butchering innocent French.

Frightening memory of brutal beheading of middle school teacher Samuel Paty by a 18 years old Abdullakh Anzorov on 16 October 2020 is still fresh in French memory. Three innocents were butchered in  knife attack inside the basilica on 29 October 2020. Among the three victims, one 60 years old woman was beheaded, 55 years old man’s throat was slit open and 44 years old woman died of several stab standings. Not only France, but even the world has not gotten over the bloodbath at  satirical magazine, Charlie Hebdo office, where 12 innocent were brutally murdered. Time Line of terror attack in France is spilling.

The Law has not named any particular religion, but it has insisted on religious fundamentalism, which connotes Islamic radicalism, as France has bloodied history of Islamic terror attacks.

By passing Anti-Radicalism Bill, France has conveyed a strong message to the world: Radical Islam is incompatible with the free world. Islam is incompatible with secularism, freedom of speech, freedom to practice any religion without any sense of fear. The experiment of assimilating Muslim refugees by opening border of Europe has been, not only total failure, but devastating for Europe.

Opening border for Muslim refugees didn’t work out because Muslims don’t want to adapt themselves to free culture of European values. They want Sharia Law in Europe. They want to subjugate women even European ones, enforce their religious laws on Europe. Their final goal is to establish a new caliphate in Europe, as it was promised in their holy book.

India has been bleeding and suffering from Islamic invasion and terrorism since thousand years. Civilisational wounds on ancient heritage are still painful. From riots to Hindu genocide in 1990s in Kashmir to 26/11, India’s calendar is full of terror attacks.

Like France India badly needs to stop religious fundamentalism and pick up radicals on the path of destruction. A more secure and robust secular environment can be achieved only when Indian government is ready to hit the fundamentalist forces hard.

When would India enforce Uniform Civil Code on the line of Anti-Radicalism Bill by France?

Manisha Inamdar
Previous articleThe members of Team Namo have added a new dimension to the election campaign in Bengal !!
Next articleTeam NAMOs RUN For Modi rally a huge success.
- Advertisement -