Forget Ram Rajya, Malwani area in Mumbai has turned into new Kashmir and Kairana for Hindus. Thanks to state government and state police. 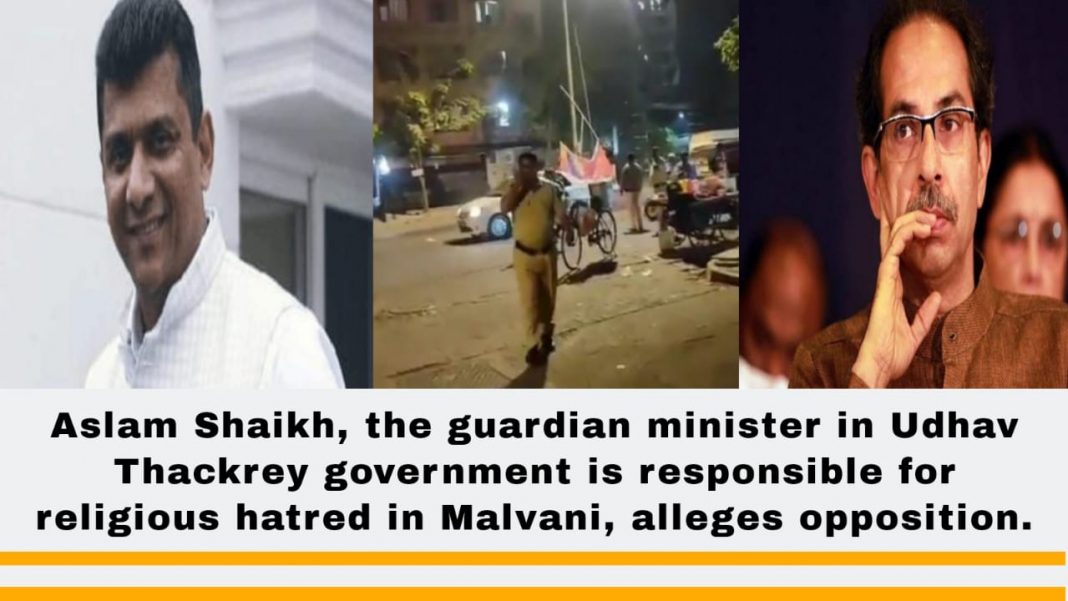 On 15 January 2021, Mumbai Police removed and tore Bhagwan Shri Ram’s posters, which Vishwa Hindu Parishad (VHP) workers were putting up to campaign “Shri Ram Mandir Nidhi Samarpan,” which is to run from 15 January (Makar Sakranti) to 27 February (Magh Purnima), for the grand temple to be built on the birthplace of Bhagwan Shri Ram in Ayodhya. Under the SRMNS, which is voluntary donation drive, VHP workers were reaching Hindu devotees by walking door to door, by putting up posters and by spreading historical significance of the Ram Janmabhoomi movement.

VHP workers said, when they were returning home after campaigning the voluntary donation drive, they saw Mumbai police officials removing and tearing the posters apart. When the VHP workers started recording the unwarranted act of police, one of police men caught the VHP workers and started beating them. Thereafter, they arrested three VHP workers on charges of preventing the police from doing their duties.

Malvani area, which is located at Malad in Mumbai, is a Muslim dominated region of Mumbai. Hindus have fled from Malvani to escape persecution of Muslims the way they ran away from Kashmir and Kairana. Locals of Malvani tell, not so long ago, but 10-15 years ago, thousands of Hindus lived there, but there has been continuous exodus of Hindus since the last 5 years. At present, only 8-10 families of Hindus—who belong to Dalit and backward classes—are left. 4 years ago, a madrasa was built illegally on MAHADA’s land, but BMC and local administration took no action against the culprits.

Also, the remnant Hindu families have been pressurized to sell their houses at walk away price. Hindu women are harassed and molested so that their families are forced to sell their houses. Locals allege that local police station and administration have turned a blind eye and a deaf ear to their torment. BJP President of Malvani region, Shri Sunil Koli says it is real estate mafia and MLA from Malad West Assembly constituency, Aslam Shaikh, who is involved in driving Hindus away from Malvani. It is also alleged that power theft and drugs business are flourishing in the area.

Malvani at Malad in Mumbai is a burning example how it is impossible to breathe for Hindus in minority under Muslim in majority. Also how Hindu are forced to sell their houses or flee from region with systematic plan. Can Hindu exodus after their continuous torment take place without political patronage? Local residents are helpless that goons enjoy political patronage from Congress MLA Aslam Shaikh, who is also a cabinet minister in the Maha Vikas Aghadi government.

Mumbai Police removing and tearing posters of Bhagwan Ram is a tip of iceberg that how nexus of politicians and police administration have secretly forced Hindus to sell their homes and run away from Malvani, how they are allowing local goons to harass remnant Hindus.

What is disturbing is that numerous complaints have been lodged by the local residents against the illegal loudspeakers on the mosques in the neighbourhood, but Mumbai police could not dare to take action against them. But, Mumbai Police took no time to remove and tear posters of Bhagwan Ram as well as arrest three VHP workers.

On 2 September 1669, when Aurangzeb was destroying Kashi Vishwanath Temple butchering every devotee, who came his way, the main priest of temple jumped into well with Jyotirlinga clutching it tightly to protect it from Islamic invader Aurangzeb. That was the era when India was under Islamic invasion.

On 15 January 2021, Mumbai Police removed and tore posters of Bhagwan Ram reportedly justifying their actions that posters were controversial in nature and hurt the sentiments of the locals. Posters of Bhagwan Ram can hurt the sentiments of Islamic invaders like Aurangzeb and their followers. Has Mumbai Police turned into followers of Aurangzeb? Do Mumbai Police want to push the country towards Islamic Invasion? Weren’t brutalities and bloodbath of Hindus during Islamic invasion enough?

Hindus waged an unending battle to restore Ram temple for 492 years, be it legal fight or mass movement. Nevertheless, they didn’t celebrate on 9 November 2019, when final judgement of Ram Janmabhoomi was declared and on 5 August 2020, when Bhoomi Pujan was performed. Today mere posters of Bhawan Ram can hurt the so called minority, who is second largest population of India?