“Do Gharwapsi if you want to avail ST benefits” : IFSCAP to Arunachal Pradesh Christians 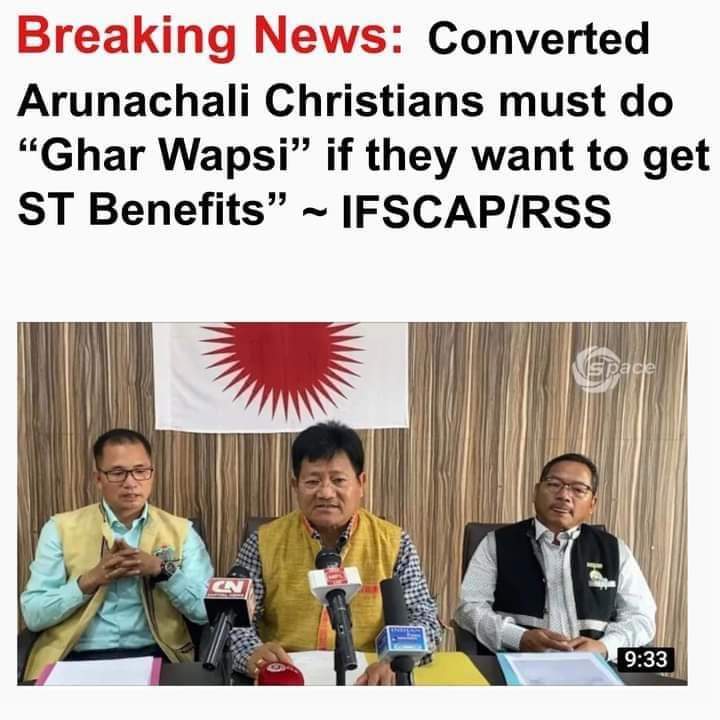 Indigenous Faith and Cultural Society of Arunachal Pradesh has been relentlessly working to save the culture and heritage of Arunachal Pradesh. Along with encouraging the Indigenous culture they are fighting tooth and nail against the conversion mafia and doing whatever is required to provide and comfort to the local people who are more often than not lured to Christianity by doling out petty favors

In a recent statement issued by IFSCAP it has clarified that the converted Christians cannot reap the benefits given to ST. In order to get those benefits they will have to return to the fold of Hinduism by doing Ghar Wapasi

IFDCAP has been criticized of associating with a hindu nationalist organization like RSS and diluting indigenous faith with Hinduism. It has thus clarified that Indigenous faith is a part of Hinduism.

“Besides that Arunachal always had a clan of Brahmins since ancient times. The Rijiju Clan of Nafra in West Kameng district to which union minister for law and justice Kiren Rijiju belongs is the clan of Arunachali Brahmins. Hence taking into account all the evidences it is clear that indigenous faith is a part of Hinduism.”IFSCAP said.