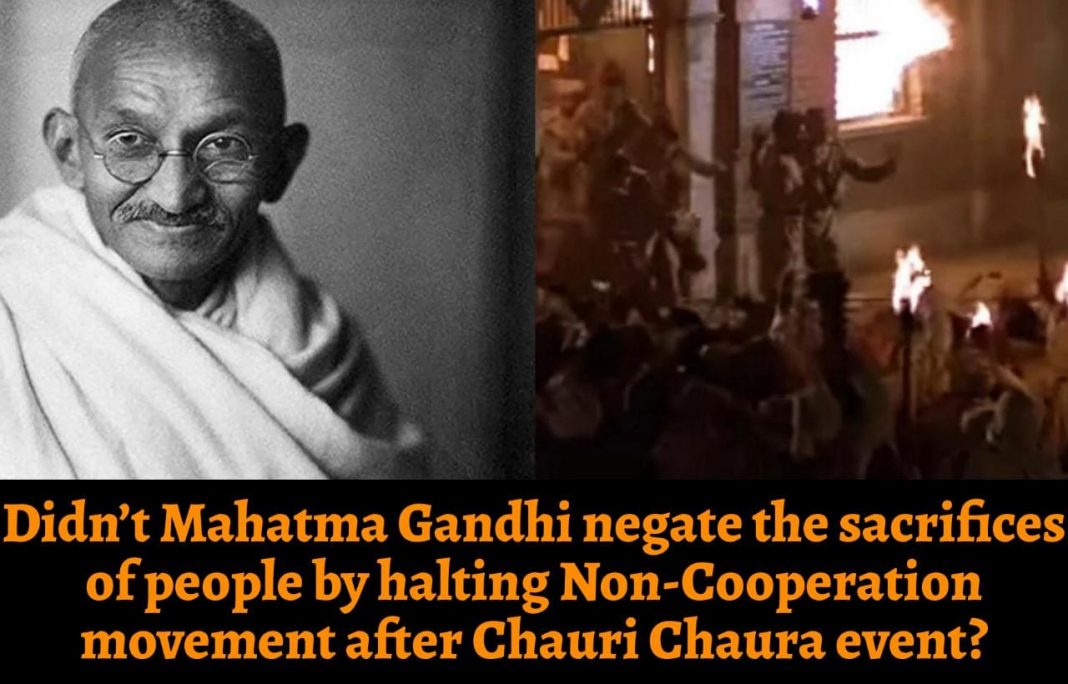 Why did Mahatma Gandhi condemn the “Chauri Chaura” incident in which a police station was set on fire on 4 Feb 1922 in the Gorakhpur district of United Province (Present Uttar Pradesh and Uttarakhand) in British India and halt the non-co-operation movement? Had Mohandas Karamchand Gandhi expected hapless Indians to die a slow, torturous and anonymous death at the hands of British, the way defenceless people had been butchered in Jalianwala Bagh on 13 April 1919?

Large-scale civil disobedience followed. People refused to pay taxes, boycotted educational institutions and resigned from their government offices. Education of students were hit hard in absence of strong indigenous collages and people, who quit job, were jobless as there were no alternative employment opportunities available. Manifesto asked people not to serve in British Army. Gandhi assured self-governance (Swaraj) would be achieved in a year, however non-cooperation movement entered in 18 months, when Chauri Chaura incident happened.

On 2 February 1922 people led by retired Army officer, Bhagwan Ahir, were protesting against high food prices and liquor sale in the market place. Instead of hearing their grievances, the local police hit, thrash and beat the protestors. Several of their leaders were arrested and detained in lock-up at the Chauri Chaura police station. In response to the beating and their leaders being arrested, the volunteers planned another protest on 4 Feb 1922 at market place.

On 4 February, around 2,000 to 2,500 people assembled to march towards the Chauri Chaura market. When the demonstrators picketed the liquor shop in the market, one of the leaders was beaten, arrested and put in jail. Next, protestors gathered in front of the police station shouting slogans demanding the release of their leader. To control the crowds, the sub inspector at the station came forward and fired at 2,500 strong protestors in Jalianwala style killing three protestors and wounding several others. The gunfire enraged the crowd, who started throwing stones at the police. Infuriated by police brutality, the angry mob set the police station on the fire, killing all the policemen trapped inside. 22 to 23 policemen had been charred to death.

In the aftermath of bloodshed, British authorities imposed martial law in and around Chauri Chaura. They conducted several raids and arrested hundreds of people.

Mahatma Gandhi was appalled at the outrage and he went on a five days fast as he thought non-cooperation movement was responsible for violence. Gandhi stated that he acted too fast to revolt against the British government without educating Indians about the importance of Ahimsa (non-violence) and without training people to exercise restraint in the face of attack. On 12 February 1922, he withdrew the movement of non-cooperation on national level due to Chauri Chaura event. In spite of Gandhi halting non-cooperation movement, 228 people were booked for trial, 6 died in police custody, 172 were sentenced to death by hanging.

Non-cooperation movement had gained momentum, even if people were jobless and students had stopped going to their academic institutions. However, Gandhi halted non-cooperation movement negating the sacrifices of people. What did Gandhi expect poor people, who were protesting against food prices? Did Gandhi expect people to die out of hunger without fighting for their fundamental rights to live? The drunkards after consuming alcohols from liquor shop used to misbehave with women. What was their men supposed to do, according to ideology to Gandhi? Should the men allow their women to be molested or violated by the drunkard?

“Ahimsa Paramo Dharma, Dharma Himsa Tathaiva Cha.” This phrase—which means Non-Violence is the ultimate Dharma. So too is violence in service of Dharma—is mentioned in Mahabharat. But, unfortunately Indians are brainwashed with half part of phrase, “Ahimsa Paramo Dharma.”

Inaugurating the centenary anniversary of Chauri Chaura event, Prime Minister Narendra Modi said, “It is unfortunate that the martyrs of Chauri Chaura have not been given significance as much as they should have been. Their blood is in the soil of the country and keeps inspiring us.” He further said, “The fire was not just in the station, but in the hearts of people.”

Can the fire in hearts be extinguished by following Non-violence? Today, India must find the answer?