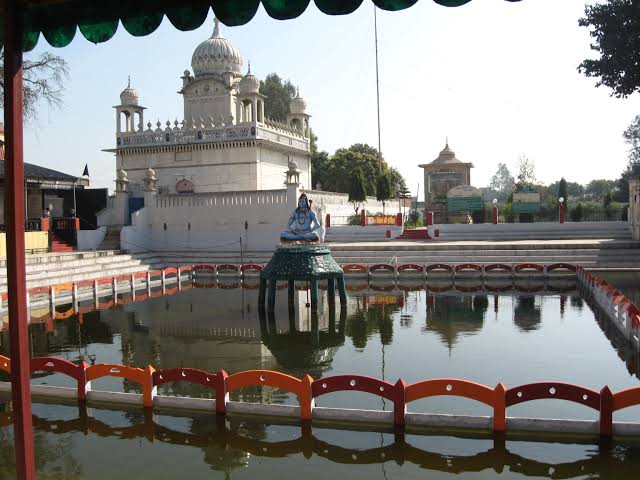 The ancient Sthaneshwar Mahadev Temple, dedicated to Lord Shiva is situated in Thanesar, a holy town within the Kurukshetra City. As per the Bhisma Parva (Chapter) of The Mahabharata that the Pandavas as per Sri Krishna’s direction prayed to Lord Shiva and received his blessings for victory in the battle of Mahabharata. The temple is located right by the side of the Main Battle Field of Kuruskhetra. The ninth Guru, Shri Tegh Bahadur stayed at a spot near the Sthaneshwar Tirtha that is marked by a Gurdwara just besides this temple.

Legend has it that the waters of the tank adjoining the temple are holy. A few drops of water cured the King Ban of Leprosy. No pilgrimage of Kurukshetra is believed to be complete without a visit to this ancient, holy temple. This Tank or the Holy reservoir as seen in the snaps is located inside the Temple premise. It is also believed that Lord Shiva was first worshipped here in the form of a Lingam. The ancestor of the Pandavas, Maharaj Kuru, performed penance on the banks of the famous & legendary Saraswati River (now dried up) and Parashuram The Avataar of Lord Vishnu created a tank or Sarovar out of the slain Kings (21 times) & their men here in Kurukshetra as mentioned in The Vishnupuran.
The beautiful temple of Sthaneshwar is the abode of Lord Shiva and this town served as the capital of Emperor Harshavardhana. The temple with a dome-shaped roof follows a regional type of architecture. The facade of the roof is shaped like an ‘amla’ along with a tall pinnacle. The Lingam is more than 5000 years old & still venerated by the local people of Kurukshetra. The inner sanctum is a perfect place for meditation & generates a radiance of utmost peace in a person’s mind.

As per the legend, Lord Brahma laid the first lingam of Lord Shiva here and hence, he was first worshipped in this temple only. As per the Vamana Purana, Sthaneshwar or Thaneshwar is mentioned as the name of the Shiva Lingam & it was here the Shiva Linga is believed to be worshipped for the first time by Bramha Creator of the Universe. Therefore the presiding deity of Thaneshwar is Lord Shiva who is said to have become Sthanu or Immovable here, hence the name Sthaneshwar.
Thaneshwar in the modern day history finds its mention by Hiuen Tsang the Chinese traveler & also in Banabhatta’s Harsha Charita written & based on the life & even King Harsha Vardhan of 07th Century
(590AD – 647AD). It was the Capital of King Harsha Vardhan & Sthaneshwar Mahadev was his Kuldevta or presiding deity of the Royal Family.