CONGRESS’S DWINDLING FOOT PRINTS IN INDIA AND WHY? 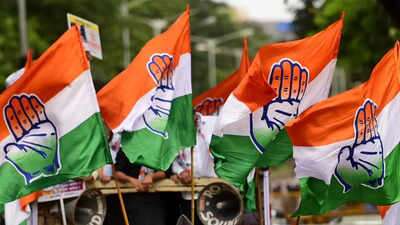 Some individuals still believe that the Congress was formed to fight for India’s freedom, while it’s exactly the other way round – formed to stall or cast a spanner on India’s nationalist uprising against British imperialism. They were handed over power by the British to retain India’s economic dependency on the West and pay lip service to them. The Congress carried on their task diligently for seven decades and looted our nation enough till Modiji happened. Now that they are aware that they have totally lost the people’s faith and credibility they are merrily transferring power to the comparatively smaller regional outfits so that the leftwing ecosystem can survive and thrive through these outfits – AAP in Delhi and Punjab, TMC in West Bengal, DMK in Tamil Nadu, SP in UP, RJD in Bihar, JMM in Jharkhand, SS & NCP in Maharashtra, TRS in Telengana, JDS in Karnataka so on and so forth.

And you thought AAP defeated Congress in Punjab? No way. The Congress removed Capt. Amrinder Singh as the CM when they found that he was not fitting into their agenda and replaced him by an out and out incompetent and unpopular Channi, letting AAP thrive in Punjab. Fortunately for them in Punjab, BJP doesnot have a base till date, they were happy to play second fiddle to their longtime ally, SAD till 2020 as SAD was more familiar and rooted into the Punjab psyche or so they believed till 2017. In fact AAP was slated to win in 2017 too but somehow Congress went on to win, maybe because Capt was unrelenting and still held sway with the voters there. This time around with strong Khalistani support, the SFJ in collaboration with Soros’s Open Society pumping in funds galore and their propaganda machinery had worked overtime to brainwash the gullible voters into believing that the State was against them – similar technique adopted here as was done in Bengal accompanied with a ‘No Vote to BJP’ campaign. It was the same PK who was handling the scenario there. If you had followed them on SM as a runup to the elections, you would know the same.

The Congress has a task cutout for them- to retain the stronghold of the ecosystem in India. If they are incapable of coming to power here, they would do so by transferring their supporters, however small in number they are, to these parties and also act as a catalyst in the propaganda, creating mayhem everywhere so that they themselves can absorb any adverse effect of such harmful propaganda, whilst these regional parties remain safe. We saw that with both UP and Punjab. They, being the oldest political party in India, with all the funds and machinery and also being the only other party with a national presence are more capable of propaganda and anarchy than the others. Hence they may have been assigned the said task by the ecosystem to carry out the same, not necessarily to grab power for themselves. They are like that serial killer in the cult film, ‘The Child’s Play’, who transferred his roguish soul to a doll before dying, so that his unfinished task of killing innocents doesnot end with him.

Throughout our childhood, we believed that the Congress and the Left were adversaries, while the Congress kept on nurturing the Left and helping in the growth of destructive leftist ideology in key fields like academia, corporate, culture – all the spheres which are potent in influencing any individual. They used leftist historians to wipe out tales of our glorious past and eulogized the invaders so that we lose faith in our ancestors, our ethnicity and our nation as a whole enabling the West to easily enslave us. Now, with the continous upward rise of the nationalistic ideology, we find that the Congress and the Left parties have formally forged an alliance thus endorsing the fact that they were allies all along. It won’t be surprising if something similar happens with all of these regional parties too. In fact an alliance does exist with them in the states of Maharashtra, Jharkhand and Tamil Nadu and existed in Karnataka too.

In view of the above, the nationalists need to be clear in their minds as to who they are fighting against – is it a political party or parties or an ideology? There is no doubt that we, the nationalists are fighting against an ideology, which is secessionist and is hellbent on destroying us as a nation and as individuals. Hence, we need not, rather shouldnot view them as separate parties and direct our fight, our counters against them considering them as one and as a single ideological enemy. In view of the above, it is also imperative for us to shun all those elements – individual or groups, who claim to forge a hindu alternative to the Sangh Parivar because they are nothing but ecosystem components out there to mislead us. No other ‘hindu’ outfit can thrive till the ecosystem maintains even an iota of influence on our nation – we saw how the SS, whom we had believed all along, to be a naturally hindu outfit colly aligned with the ecosystem sponsored parties and are now engaging and encouraging such acts which are far from being in favour of the hindus.

If we keep these facts in our minds, we shall find immense help in fighting the enemies of our nation, the ‘0.5’ people whom our PM Modiji mentioned in his speech . He didn’t take any names but referred to the destructive ideology and their nefarious designs. So we should also view them as one and fight accordingly.