Congress Govt of Rajasthan, The Kashmir Files & the see-saw over Section 144. 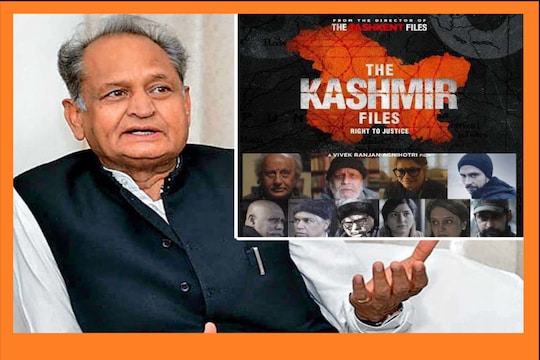 The most remarkable, the most unprecedented event to have occurred this year till date, is that of a mere feature film turning into a mass movement, an emotion, an inspiration of providing voices to the voiceless, tortured group of people, who watched with horror all these years their tormentors turn into victims by sheer media jugglery and they were well forgotten.

It has treaded into uncharted territory where no other filmmaker had dared to tread in the past for fear of backlash and hence they were always compelled to be politically correct causing their filmmaking to lose sting. But this one film did not deviate from the truth even by an inch and presented the stark reality of the Kashmiri Hindus being killed in the most macabre manner by none other than their very own neighbours, friends, colleagues and associates belonging to the significant ‘other’ community, under the toxic influence of our enemies from across the border.

Most of the Indians, including some members of the cast and crew of the film too, learnt about the ghastly incident for the very first time. The curiosity and emotion around the film is such that it is being screened in never thought of locations like the East European nation, Estonia which is home to around 150-200 Indians only.

The film has stirred up a hornet’s nest and the Congress party, which ruled our nation for nearly 7 decades since independence, is not amused. The Kashmir dispute was a thorn in their flesh since independence, which they failed to resolve or did not exhibit any desire to resolve, primarily due to their appeasement policy and liaison with the Kashmiri politicians. Their weakness in handling the issue saw the ‘dispute’ escalate to the UN and became a global issue for various, not-so-friendly nations to get back at us.

Their handling of the Kashmir issue with kid’s gloves saw the drastic rise of insurgency in the land leading to the killing of innocents and the matter reached it’s pinnacle in the late 80s when Rajiv Gandhi was the Prime Minister of India and Farooq Abdullah was the Chief Minister of Jammu and Kashmir.

It is also thus, not surprising that they have scathingly attacked the film, calling it a political propaganda and a film that will breed hatred between the two communities. They even went to the extent of blaming the BJP for the Kashmiri Hindu massacre of 19th January, 1990 because the party with only 85 MP, had lent outside support to the V. P. Singh – led Janata Dal government, which was in power at the time.

However, when provided with data and facts about the brutality on Kashmiri Hindus and increase in terrorist activities in Kashmir during Congress rule, coupled with the incidents mentioned in the book ‘My Frozen Turbulence’ by Jagmohan, who was sent to Kashmir as the Governor on 20th January, 1990 to help bring about an end to the turmoil there, the Congress’s propaganda fell flat.

With all avenues of propaganda closed and sensing public fury against them, Congress set about the task of doing what they do best – Ban whatever does not suit their narrative. But now they donot have the power to impose a nationwide ban on the film because they are out of power. Gone are the days when they could easily ban the connoisseurs of performing arts like Hriday Nath Mangeshkar, for composing music for a poem written by Veer Vinayak Savarkar and Kishore Kumar, for refusing to accede to Mrs. Indira Gandhi’s request of promoting governmental agenda on radio and television. Besides, these, here is a long list of bans on books and cinema by the Congress under Nehru because the same went against their interests:
1. Majrooh Sultanpuri was jailed for his anti Nehru poem.
2.Ramesh Sehgal was asked to delete lines from his film,
3.Sahir Ludhianvi’s song was censored,