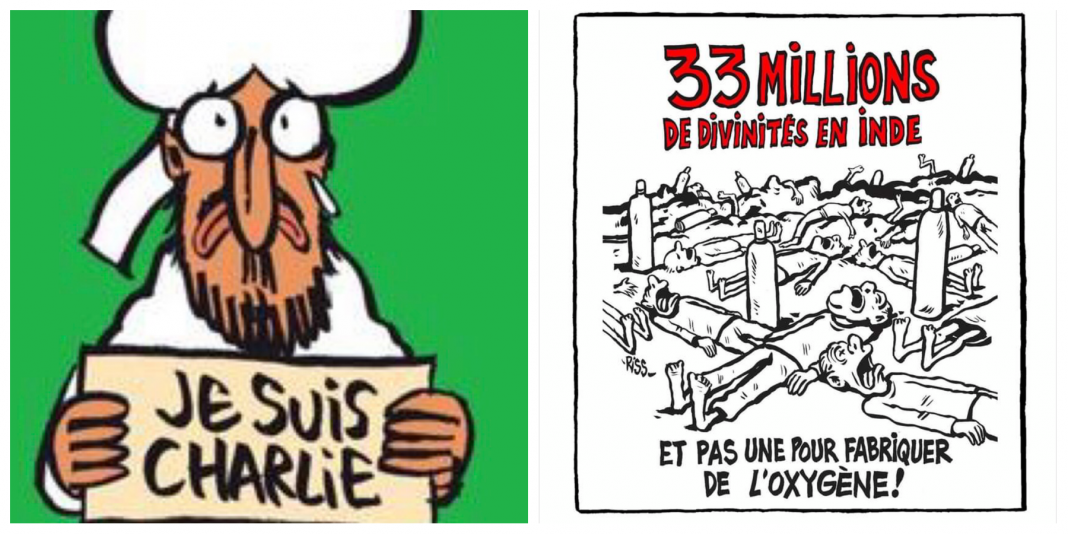 Can a cartoon on your faith provoke you to spill blood of innocents? Or violence is injected in your soul during your formative years in the name of protecting your faith? Can there be a justification for the massacre of innocents? One billion Hindus across the world displayed not only tolerance towards freedom of speech, but also conveyed a message Sanatan Dharma, the oldest faith is so deeply rooted that its root cannot be shaken by a cartoon.

Charlie Hebdo, the French satirical weekly magazine published a cartoon, which depicted Indians lying on the ground gasping for oxygen, while it mocked Hindu Gods and Goddesses with caption—33 million Gods in India and not one capable of producing oxygen. The cartoon was published on 28 April and posted on Charlie Hebdo’s Facebook timeline on 11 May.

The cartoon not only hurt religious sentiments of 1 billion Hindus, but mocked India, which is battling with deadly second wave of Covid-19 with all its might, even if shortage of Liquid Medical Oxygen was a reality.

The cartoon also displayed its lack of knowledge about Hindu Gods and Goddess. 33 KOTI is not 33 million Gods, but 33 types of Gods, which includes several elements of nature. However, what the world witnessed is that even if Hindus were offended, they didn’t threaten Charlie Hebdo with dire consequences. Hindus, neither protested outside its office, leave aside hurting and harming Charlie Hebdo employees. Young gun Hindus didn’t even bother to run a twitter trend against Charlie Hebdo.

Charlie Hebdo doesn’t need to remind how its office in Paris was attacked by two Muslim brothers, who brutally shot 12 of its journalists dead and 11 others injured on 7 January 2015 for publishing a cartoon on Prophet Muhammad. The massacre had not stopped at Charlie Hebdo’s office, but wave of killings were carried out in several parts of France to avenge the cartoon of Prophet Muhammad.

Was the caricature on Prophet Muhammad responsible for series of terror attacks in France? Or was it an uncivilized and barbarous element, which needed a spur to shed blood of innocents? If a cartoon can be the reason behind blood bath, Hindus too, should have stormed into Charlie Hebdo office. But, they didn’t even make it an issue. Hindus are inherently seculars, who coexist even with those who invaded their land and ruled them.

The Republic of India is a secular state in constitution. However, in practice, it is minority appeasement targeting the majority in the garb of secularism. Secularism is a system, which separates religion in running the affairs of state, which must not promote any religion. But, self-proclaimed seculars in India are those who indulge in minority appeasement. On 9 December 2006, former PM Manmohan Singh had suggested that plans for minorities, particularly Muslims, must have the first claim on natural resources so that benefits of development reach them. Does secularism permit special benefits only for minorities, particularly, Muslims?

Kerala Chief Minister Vijayan was forced to delete his Facebook post condemning the murder of an Indian nurse, Soumya Santosh, in rocket attacks by Hamas Terrorists in Israel. Similarly, Congress leader, Veena S Nair had to remove a Facebook post, which condemned Hamas terrorists with a view not to offend Muslims. This is how self-proclaimed seculars—who don’t hesitate to support terrorism—practice secularism in India.

Would self-proclaimed left liberal and secularists ever tell the world how Hindus in India have maintained the ethos of tolerance and freedom of speech in real sense? It would be a welcome move by Charlie Hebdo, if the magazine also shares how religions in the world displays its tolerance towards freedom of Expression.