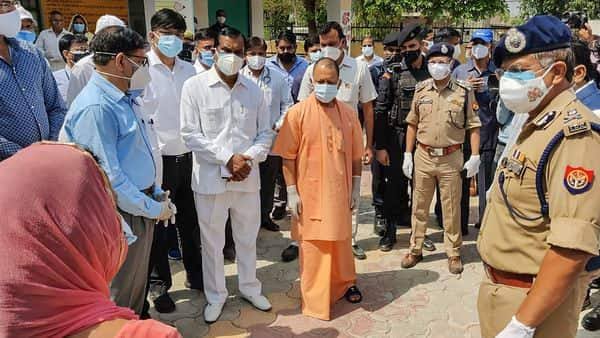 As the ferocious second wave of the Corona Virus pandemic wreaked havoc throughout the country unleashing its merciless onslaught sweeping across various states, the responses mounted and respective mitigation strategies adopted by various state governments have been the focus of discussions in media as well as among general public. Now, as the second wave seems easing with several states with high case loads showing downward trend, it is expected that the country would be out of woods soon.

While considerable media attention and limelight have been on states like Kerala , very little has been told about Uttar Pradesh – India’s most populous state. Like all other states, UP too faced the deadly second wave when cases and deaths rose dramatically from the first week of April onwards. The UP government had received widespread applause for its deft handling of COVID in the first wave of the infections. With appropriate strategies like lockdowns, weekend curfews and aggressive testing, it successfully managed to flatten the curve and was ahead of many other states, even the ones with lesser population and superior medical infrastructure. But since the second wave brought along with it mutated strains, it sporadically escalated the scale of infections as well as deaths. From 10,000 cases a day in second week of April, the infections peaked to around 38, 055 cases on April 24, its highest single day spike. It raised many eyeballs with health experts and bureaucrats anticipating huge surge in the coming days. However, putting all speculations to rest and much to the respite of the people, cases started sliding thereafter. This was combined with highest daily testings to reduce the case burden and to ensure that undetected patients should not become spreaders. Uttar Pradesh has conducted highest number of tests for any state in the country and the cumulative tests stands at 4.9 Crore as of 29th May 2021. On an average, the state is conducting 3.2 lakh to 3.5 lakh tests daily, a record in itself and its test positivity rate has reduced to 0.7 pc, the lowest in the country and much below the threshold limit of 5 pc set by ICMR. Similarly, UP’s case fatality ratio is 1.2 pc, much lower than states like Maharashtra and Delhi. UP has a robust recovery rate of 96.1 percent, much higher than the national average of 90 percent. All this comes in the backdrop of aggressive testing breaking all previous records and surveillance strategies implemented in the grass roots level. Unlike in states like Rajasthan, Delhi , West Bengal and Chhattisgarh where cases were projected to be reducing by lowering the daily testings significantly, UP government didn’t reduce the testing for even a single day. As of 29th May, UP’s cumulative cases stand at 16,88,152 with 16,21, 743 of them already recovered. Number of active cases stands at 46,201 and deaths at 20,208. Many states like Maharashtra, Tamil Nadu, Kerala and West Bengal have active case loads ranging between 1 lakh to 3 lakhs. Hence, this is no mean or insignificant achievement for a state like Uttar Pradesh.

Another dimension of UP model is the ramping up of medical infrastructure. As the second wave ravaged major urban centres like Lucknow, Kanpur, Varanasi and Meerut, demand for oxygen significantly went up prompting the government to make meet the growing demands with the help of oxygen trains run by Central Government. However, on 10th May 2021, CM Yogi Adityanath announced that his state would be self reliant in terms of oxygen and announced that 300 oxygen plants are being set up by the state government across UP. This is in sharp contrast to states like Delhi where many patients died due to lack of timely oxygen support and the respective state governments failed to come up with their own oxygen plants despite being allocated funds for the same by the Central Government.

The most significant aspect of Yogi government’s COVID handling has been the grassroots networking and efforts of contract tracing directed at rural areas of the state. As the second wave was more lethal in terms of its infectivity, the virus quickly spread to the countryside of UP, where more than 70 pc people live in villages. This was more challenging for the administration. However, a proactive and action oriented CM stepped in to combat this challenge too. Yogi Adityanath personally toured across several villages of the state to monitor the situation and personally interacted with health personnel like ASHA and Anganwaadi workers to motivate them to conduct door to door surveys in the villages and identify the people with symptoms and report to the administration immediately. This approach was acknowledged by WHO which in a tweet on 10th May lauded the UP government for initiating house – to- house active case finding to contain transmission by testing people with symptoms for rapid isolation, disease management and contact tracing. At the village level,’ Nigrani Samitis’ were formed to encourage people not to hide their illness and get tested immediately if they develop symptoms. As many villagers fall prey to misinformation or fake news owing to their illiteracy and ignorance, trust building by investing on social capital in this crisis times is the key to win the war against this invisible contagion.

Vaccination remains the only shield against the virus. UP has so far inoculated 1.8 crore doses of vaccine, second highest in the country. It became the first state in the country to float a global tender for procuring vaccines from foreign manufacturers specifying that it needs 40 million doses for its population by the year end. Pointing towards a not let up in its preparedness, CM Yogi had on 17th May announced that in anticipation of 3rd Wave, which is going to affect children, construction of Pediatric ICUs in every district has been initiated.

Uttar Pradesh has indeed become a model state worth emulating in terms of pandemic management of such epic proportions and given the complex socio economic as well as cultural matrix the state has, a pertinent question here arises, ‘If UP can, then why can’t others?’