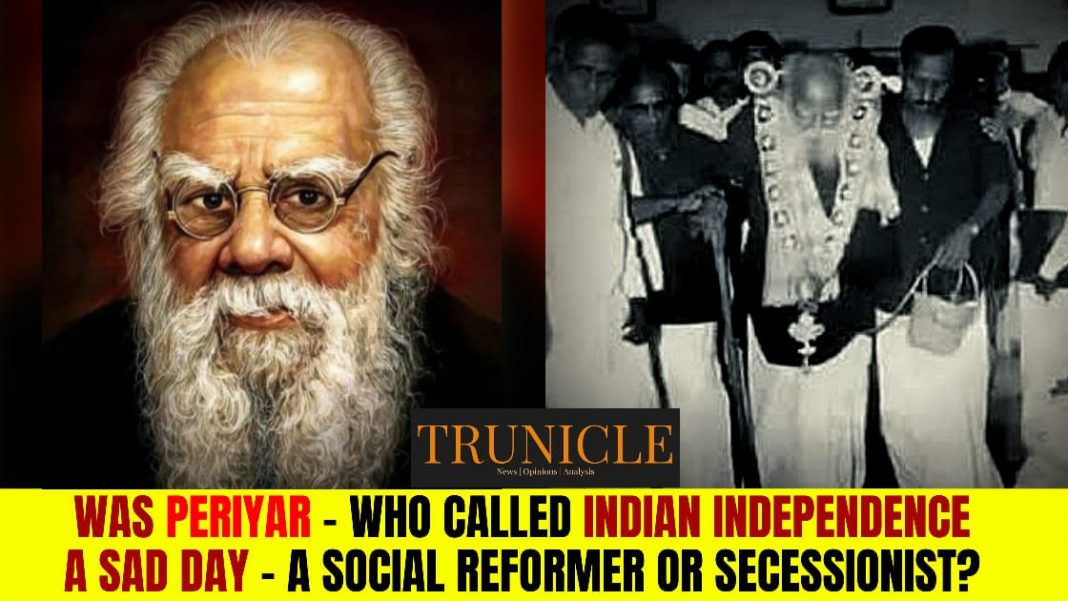 What is parallel between Periyar, Father of the Dravidian Movement and Jinnah, father of Pakistan?

Muhammad Ali Jinnah was able to reach his goal to form Pakistan to establish Islam, while Erode Venkatappa Ramasamy, popularly called as Periyar miserably failed to create Dravida Nadu for Dravidians. God forbid if Periyar would have succeeded in his aspiration, India would have divided into three parts India, Pakistan and Dravida Nadu separate from North India, instead of two parts in 1947. Today’s Dravida Nadu comprised South Indian states like Tamil Nadu, Kerala, Karnataka, Andhra Pradesh and Telangana. He called North India Aryanstan.

Would it be overstatement to state that if Periyar were alive today, he would have been shouting slogans of भारत तेरे टुकड़े होंगे in JNU and leading anti CAA protest sitting in Shaheen Bagh?

There is no denying that social evils were prevalent in Indian society pre independence era. Known as social reformer, who fought to destroy caste discrimination, and fiercely ran movement for social equality Periyar was also believed to have worked against women oppression.

Periyar, born on 17 September 1879 in Erode, which was part of the Coimbatore district of the Madras Presidency, started his political career as Congress worker in 1919. However, he quit Congress in 1925 when he witnessed party was serving the interest of upper caste and Brahmins. In 1939 Periyar was promoted to be the head of Justice Party, Periyar changed its name to Dravidar Kazhagam in 1944.

Periyar did fight against injustices like caste based inequality. But, how?

Instead of finding a remedy to end the discrimination Dalits faced, Periyar instigated hatred against Brahmins and other upper castes. Periyar had allegedly spewed the venom, “If you see a snake and a Brahmin, kill the Brahmin first.” His hatred towards Brahmins was unparalleled. Huge numbers of Brahmins were forced to flee Tamil Nadu, after Periyar’s followers attacked Brahmins by cutting their tufts and sacred thread (Janeu). Did acrimony and hate against Brahmins help Dalits to uplift their social status?

Periyar proclaimed Aryans, today natives of Northern India, are not native of India, but they invaded India. This ideology has been foundation of Dravidian movement. The very ideology has poisoned the relationship between North Indians and South Indians. Sizeable South Indians are still brainwashed that Aryans are invaders.

Dr. Bhimrao Ramji Ambedkar, the chief architect of the Constitution of India, has verified that Aryan Invasion Theory is baseless and false. In his book, Who Were The Shudra, Babasaheb Ambedkar, he systematically proves that there were no such Aryan Invasion. In fact, Aryans and Dravidians belong to the same race. Unfortunately, entire Tamil Nadu politics runs on Dravidian ideology. Invisible wall of division between South and North India was erected by none other than Periyar.

In 1971, Periyar had held an “anti-superstition rally” in which naked pictures of God Ram and Sita were paraded in public and garlanded with slippers,” revealed Rajnikanth, the mega star at Thuglak magazine’s 50th anniversary event in Chennai on January 14.

Even if Periyar apologists tried to intimidate Rajnikant to tender apology for his statement, the actor didn’t budge from his position. “Periyar was an iconoclast who thrived on acrimony, frightfulness and anger. He never gathered courage to criticise the regressive, misogynist, exclusionist and bigoted practice other than Hinduism. In fact, Periyar praised Abrahamic religion Islam. He encouraged Hindus to convert to Islam,” quoted Anand Ranganathan, the author.

How can a so called woman liberator subject to his own wife to mental trauma?

Periyar’s first wife, Nagammai was a religious woman, who used to go to temple frequently. When Periyar couldn’t dissuade her from going to temple, he secretly introduced his wife to his minor friends as new Dasi, who was ready to make union with men. Periyar’s minor friends started teasing and stalking his wife on the way to temple. Consequently, Periyar’s harassed wife stopped going to temple. The incident is quoted in Tamizhar Thalaivar written by SWAMY CHIDAMBARANAR.

Periyar and his supporters observed “Black Day” on 15 August 1947.

In 1965, in an interview to a Tamil magazine, Anantha Vikatan, Periyar said, “I told British that they were dishonest to hand over power to Nehru and Jinnah. British smiled and said India had differences between Hindu and Muslims, not between Brahmin and non-Brahmin. Then I went to meet Jinnah to seek his help. Jinnah said that your bed (plan) looks promising but it lacks the legs to stand on. Jinnah said that it was I who could have helped my aspiration.

When Periyar’s ambition was not materialised, he called “15 August 1947” a sad day. It is scary to imagine up to what extent Periyar’s ideology would have caused destruction and despair if his plan for Dravida Nadu would have materialised. What would have happened to Brahmins in southern India? India still remembers how genocide of Brahmins was committed in Maharashtra after Gandhi was shot in Jan 1948.

It can not be denied that there was disgraceful discrimination against Dalit those days. It was Babasaheb Ambedkar, a real social reformer, who constructively worked to uplift Dalits to join hands with enlightened strata of society.

Periyar Erode Venkatappa Ramasamy was a radical thinker. He vehemently opposed everything under sun without offering a solution like an anarchist. Isn’t it high time such anarchist, a fake hero be brought down from pedestal in history?

What amount of brutality and savagery does it take to butcher unsuspecting Hindu families including women and innocent children, celebrating Holi in...
Read more
Expose